Difference Between Confirmed And Unconfirmed Letter of Credit 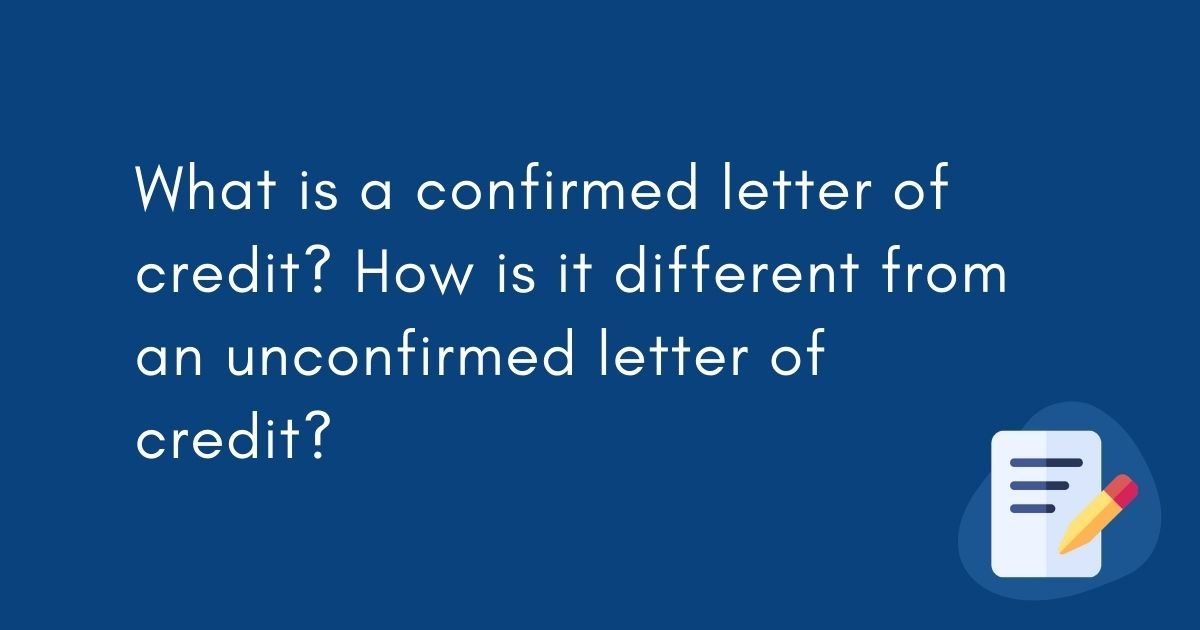 If you are running an international business, you may be aware of what a letter of credit is. It is a legal document that is issued by a bank or a private financial institution to the exporter on behalf of the importer guaranteeing that the amount of LC agreement will be paid on-time. And if the importer is unable to do so, it will be covered by the issuing bank. In short, here the bank acts as a financial guarantor for the importer and ensures the exporters the amount for their delivered goods and services. But when it comes to the types of letters of credit, you often get confused between confirmed and unconfirmed LC.

In this blog, you will get to know how confirmed letters of credit are different from unconfirmed LC. Keep reading to know:

What Is A Confirmed Letter Of Credit?

A confirmed LC is a Bank Credit Letter where the payment guarantee of the seller or exporter is backed up by a second bank or a confirming bank. In simple words, in case if the first bank defaults to pay, then the payment will be covered by the second bank. This type of trade finance payment method is used by importers and exporters in international trade where an additional guarantee is provided to the original documentary credit from a second bank. The borrowers are required to apply for the confirmed LC if the seller is not convinced about the creditworthiness of the issuing bank of the original letter.

What is an Unconfirmed LC?

Contrary to unconfirmed LC, it refers to an documentary credit where the exporters or sellers do not acquire any additional or second guarantee from a second bank. It means an unconfirmed LCs are those where there is only a guarantee of payment by the original issuing bank. Here the second bank involves only to act as an intermediary and to help process a transaction. There is no additional confirmation by the secondary bank. Ensuring payment security is the most common reason for acquiring a letter of credit services as a means of payment in international transactions. Therefore, most documentary credits are unconfirmed LCs.

Related Read: Letter of Credit Guide - Features, Importance & When To Use It

Difference Between Confirmed And Unconfirmed LC

Here are the key points of differences between the unconfirmed and confirmed bank credit letter Keep reading to know:

1. Cost  - The cost of unconfirmed LC is less compared to confirmed LCs as there are no confirming bank charges applied while the confirmed letters of credit are expensive due to the charges.

3. Amendments - Only the beneficiary i.e. the seller is authorized to make or request the changes in the unconfirmed LC via the applicant while in case of a confirmed bank credit letter, the second bank can also make changes or amendments directly to the issuing bank.

From the above points of key differences, we can conclude that confirmed LCs are more secure than unconfirmed letters of credit but with additional costs. Therefore the seller must analyze the costs of the payment credit letters as per the requirements of your business to determine which type of letter of credit is suitable for your business.